The Registrar/Chief Executive of the Joint Admission and Matriculation Board (JAMB), Professor Dibu Ojerinde, has reacted to the protest at the University of Lagos by parents and candidates who could not access the university’s admission.

According to him, the policy introduced by JAMB, for which he has been criticised, “is actually meant to help the candidates not only to get admission but to get it on time.”

He noted that JAMB had made the situation clear to the institutions during its policy meeting on 14th July, after it held discussions with the representatives of the federal, state and private universities where the degree of the problems of candidates were presented and solutions were proffered.
“By this approach, wastage of high scores will be reduced, the fate of the candidates will be determined on time and yet the interest of their areas of study may be satisfied,” Ojerinde stated.

He explained that the decision became imperative because “the big universities are overloaded” while others have spaces that are not filled. 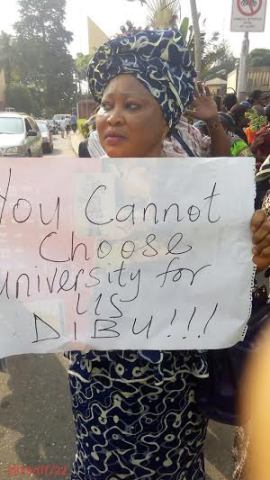 He added that JAMB had discovered that courses like Biological Sciences, Pharmacy, Agricultural Engineering and related courses are, in most cases, without enough candidates in the universities while everyone scampered to study medicine and only a small percentage eventually get admitted.

“We are saying; let’s give them a feel of chance somewhere else that has not gotten enough candidates for law or medicine by sending the names of these high scorers to “needy” universities. In addition, the concept of selection by merit, catchment area and educationally less developed states will be adequately catered for.

“However, I am not saying that everyone will get admission or even get their original choice of course of study. But it is better than wasting the time, finances, and good scores of these candidates. We need to fill the available spaces as given to us by the regulatory bodies such as the National Universities Commission (NUC); National Board for Technical Education (NBTE) and the National Commission for Colleges of Education (NCCE).

” But if a candidate does not want the given opportunity, he can decline the offer and just refuse to take any step,” the JAMB Registrar stated.

Ojerinde indicted some so-called educational consultants who have hidden agenda, which are being thwarted by JAMB’s proactive steps, as being behind the protests, warning that: “This is a period of CHANGE. If they do not CHANGE they will be CHANGED.”